Buying a processor for a gaming rig isn’t as hard as it used to be. Now that AMD’s Ryzen and Intel’s 9th-gen Core CPUs come with more performance and cores than ever before, it’s hard to buy a stinker these days—especially because most games favor graphics firepower over CPU oomph. All that said, there are specific chips that stand out from the horde as the best gaming CPUs due to their price, performance, or nifty extras.

Updated October 31, 2019 to include the Core i9-9900KS and new recommendations. Whether you’re on a budget or willing to pay for sheer face-melting speed, these are the best CPUs for gaming PCs that you can buy.

It’s going to be a busy fall for PC processors. AMD delayed its 16-core, 32-thread Ryzen flagship, the $750 Ryzen 9 3950X, to November. Third-generation Threadripper processors will launch the same month, kicking off with a 24-core version. While AMD hasn’t said much else about Threadripper, we expect models with even more cores to appear once the sky-high demand for the company’s most expensive 7nm chips dulls, or supply increases.

Intel isn’t sitting on its thumbs though. In addition to launching the Core i9-9900KS, the fastest CPU for gaming ever released with an all-core 5GHz boost, it’s also slashing prices in response to AMD’s awesome 3rd-generation Ryzen processors. It cut the cost of all F-series processors—Intel Core chips that lack integrated graphics—by $25, and announced that its next-gen “Cascade-X” Core-X series chips will launch at prices over 50 percent lower than those of its predecessors. While the 18-core Skylake-X flagship cost nearly $2,000, the new 18-core Core i9-10980XE Extreme Edition chip is downright cheap at $979. The 10-core Core i9-10900X chip is a mere $590.

The best gaming CPU for most people

Intel’s ruled the gaming roost for seemingly time eternal, but in 2019, AMD seized the mainstream crown. Pound for pound, the Ryzen 5 3600X is the best gaming CPU for most people, and the best mid-range CPU period.

While Intel removed Hyper-Threading from most of its mainstream Core lineup, leaving most of its Core i5 lineup with six cores and six threads, AMD bestows its Ryzen parts with simultaneous multi-threading, giving the six-core Ryzen 5 3600X a full twelve threads. That gives it a serious advantage in productivity workloads. But for the first time in recent memory, AMD’s mainstream chip outpunches its direct Intel rivals too. AMD infused its third-gen Ryzen chips with massive instructions-per-clock (IPC) improvements and faster clock speeds, with the 3.8GHz Ryzen 5 3600X capable of boosting up to 4.4GHz. 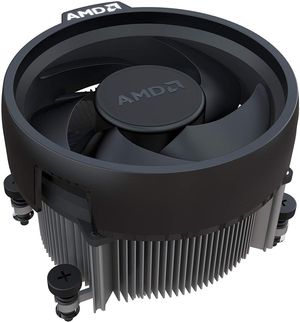 The Ryzen 5 3600X comes with AMD's Wraith Spire cooler, while Intel's rival K-series processors require you to bring your own.

Together, those gains help propel the 3600X past Intel’s Core i5-9600K in Tom’s Hardware’s testing, and the beloved Core i7-8086K in Tech Radar’s testing. Most AMD motherboards support overclocking for the adventurous if you want to try your hands at even better performance.

You can find the Ryzen 5 3600X for $235 at Nerdcore Computers, down from a $250 launch price. Better yet, AMD tosses in three free months of Microsoft’s superb Xbox Game Pass for PC with every Ryzen purchase, and your choice of either The Outer Worlds or Borderlands 3. That’s a lot of free gaming goodness to go with a great gaming processor.

Mentioned in this article

If you want to spend a little less cash, or don’t mind overclocking, consider the AMD Ryzen 5 3600 instead. The non-X version costs $295 at Nerdcore Computers. It packs the same six cores and twelve threads but runs a little slower with a 3.6GHz base clock and 4.2GHz boost clock. The reduction in clock speeds drops the Ryzen 5 3600’s gaming performance a bit, with the chip trading blows with Intel’s Core i5-9600K in gaming benchmarks at TechSpot and GamersNexus, but it’s close. With AMD’s chip offering twice as many threads as Intel’s, and gaming performance so close, both sites give the Ryzen 5 3600 a hearty recommendation.

If you want a gaming CPU that won’t break the bank, look no further than the $100 Ryzen 3 3200G. The continuation of AMD’s “APU” strategy, this third-gen Ryzen chip blends four Ryzen CPU cores with eight of AMD’s powerful Radeon Vega compute units. The end result? A solid-performing chip that can play PC games without the need for a graphics card.

It’s built using 12nm Zen+ cores rather than the 7nm Zen2 cores in other third-gen Ryzen processors, but the Ryzen 3 3200G should still deliver enough punch for basic gaming. Its predecessor, the Ryzen 3 2200G, handled e-sports titles like Fortnite, Dota 2, League of Legends, and Rocket League with ease and turned in surprisingly good frame rates even in AAA games like Destiny 2 and Rise of the Tomb Raider. You might need to alter some graphics settings and maybe dial the game resolution back to 720p for the best results, but you can get the vast majority of games running between 30 and 60 frames per second with some tinkering.

You can improve your gaming experience by pairing the chip with other hardware. For instance, an affordable FreeSync monitor such as the 21.5-inch, 1080p Acer SB220Q ($90 on Amazon) would smooth out tearing and stuttering, And because the chip uses your system RAM to feed the Radeon graphics, faster memory would help. Aim for 8GB of 2,933MHz or 3,200MHz RAM for best results, but lower speeds still work. Just make sure you get a dual-channel kit with two memory sticks, because single-channel nukes the gaming performance of Ryzen APUs.

Mentioned in this article

Stepping up to the $245 Ryzen 5 3400G adds simultaneous multi-threading for 8 total CPU threads, faster speeds, and three additional Radeon Vega compute units for better gaming performance. Given the much higher cost, however, the Ryzen 3 3200G is a better pick for most people on a tight budget. If you’re buying a Ryzen APU, though, make sure your chosen motherboard includes an HDMI port.

10 things you have to know to be computer literate

onsite computer repairs - local pc repairs company throughout australia. We repairs all computer systems with a no fix no fee policy